The Hertha lake is located on the island of Rügen in the Jasmund National Park in the middle of the island. The lake is 170 meters long and 140 meters wide. In the deepest places, the Hertha is more 11 meters deep. On the dike around the lake is Hertha Castle, a fort of 17 meters high. This fort was built and inhabited in the period between the eighth and twelfth centuries after Christ. 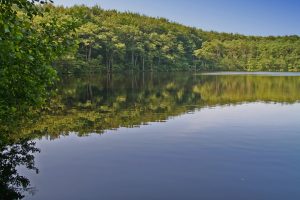 Historical research has shown that the lake had to be named after the goddess Nerthus and not to Hertha. A number of centuries ago a name has been written that has not been restored. There have been votes to bump into Nertussee yet, but requests from Denmark, so far, have always been rejected.

The story about Goddess Hertha is still inspiring

To this day, the Hertha is living legend. The Sassnitz schoolchildren earn a pocket in the summer holiday by following the legend of Hertha for the tourists visiting Rügen. But other places on the island of Rügen claim that they hide the location where the story around the goddess Hertha has ever played. This sometimes leads to mutual rivalry. You can find the story about Hertha, or Nerthus’s legend, which is actually the correct name in various publications. The goddess Hertha visited the island with her result, but when she took a bath in the lake that later called Hertha, her helpers were swallowed by the water. The goddess himself survived.