The Krijtrotsen near Rugen, near the village of Sassnitz and in the Jasmund National Park, belongs to one of five locations in Europe where chalk cliffs can be found.

The rock-white rocks on the Jasmund peninsula are one of Rugen’s features. From the sea level to 20 to 100 meters above sea level, the white chalk crests rise. The contrast is unique because the blue water and the green beech forests provide a very beautiful setting.
The total crater’s coast is about 15km long and is best seen from the water, it is also possible to take a look around the rocks and the rocks / strings per foot under the rocks. This walk goes from Sassnitz to StubbenKammer, the walk goes along the edge of the chalk cliffs. The walk is advisable when it rains because it can lead mud, clay and the combination with limestone for slippery situations.

The highlight of the chalk cliffs is the Königsstuhl, which is the highest point on the coastline, 118 meters and is very good to see from the sea.

The chalk crests are constantly subjected to severe erosion, during every rainfall rocks fall down and during each major storm at sea there is a lot of shore again.

The erosion seems to have grown in recent years, and it is very noticeable of the very large amount of fossils found at the foot of the various rocks.

For more information about the national park read this page

The chalk pots are always favorite items for artists. Caspar David Friedrich liked to paint the chalk pots, copies of his paintings can be found everywhere 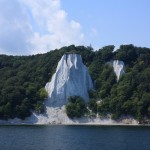 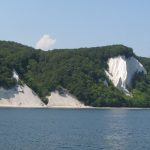