Schloss Spyker originates from the “Swedish time”, it was built between 1570 and 1595. It was donated by the Swedish King Christina to Marshal Carl Gustav Graf von Wrangel for his proven services in the thirties war. After the war, this part belonged to Germany to Sweden. Initially, it was a castle with a finch, in the years after Maarschalk Von Wrangel, the Schloss administrator was converted to its present form and the building was painted red, which is still the case today. When the Count died in 1676 he left the Schloss after his daughter. When that died, it came through her sister, who was married to the Swedish noble family Brahe. Eventually, the Schloss came in the possession of German Prince Wilhelm Malte Zur Putbus in 1817. 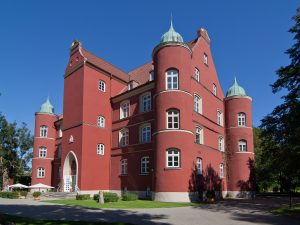 Use as a hotel and restaurant. The current owner also realized exhibition space and a theater where regular performances are given.

In addition to being a place of interest, Schloss Spyker is a hotel with comfortable rooms. It is also used for weddings and other parties. The associated restaurant is well-reputed in Putbus and surroundings. For people who like peace and nature, this is an ideal location. Because the island of Rügen is not large, this is a great base for visiting the whole island during your vacation.