Putbus castle is the former residence of the Prince of Putbus, which founded the same name in 1810. The castle was demolished in 1962 and since all the remains have been removed since 1964, only the contours in the park where the castle has ever left Stood. Only the terrace on the lake has been preserved. 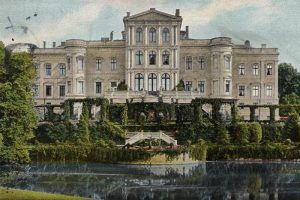 The castle was built in the 19th century as it looked until the demolition. In 1865 a major fire broke out, the recovery of the damage lasted almost 10 years. During the Second World War from 1940-1945 the castle was used to defend the Allies. After the war the castle was plundered and it fell into decline. In the fifties of the last century, plans were still being made for restoration but it lacked funding. Therefore, in 1962, the final demolition began.

The Castle Park One of Rügen’s most beautiful hiking areas

The castle park of Rügen is one of Rügen’s most beautiful and romantic areas. Other sights include the church, which was originally built as a hairdressing salon in the 17th century but was later converted to church. The Orangerie is also worth a visit, exhibitions are organized here. In the castle garden you will also find the mausoleum where the family of Von Putbus is buried, it is a grave in neo-Gothic style. The former stables of the castle have also been preserved. These are used today for cultural purposes.

Free entry in the Castle Park

The castle park is open all year long for free. Regardless of the season you can enjoy walking and enjoying the peace. The exhibition in the Orangerie is available for payment as well as the activities in the former stables.