The Störtebeker Festival is held every year from late June to early September. It has been organized since 1993 and takes place on the banks of the Jasmund Bodden in the town of Rasewiek on Rügen. It is Germany’s most successful open air theater. The fact that the festival is extremely popular is the fact that in 2007 the four million visitors were welcomed and in 2009 the five millionth. On average, the various performances performed during the festival are viewed by around 4600 people.

During the DDR time, the natural stage was built in 1959, where the performances are presented to date. The first performance that was played was the dramatic ballad “Karl Störtebeker”, thanks to the contemporary festival as well. This historical performance was played from 1959 to 1961 and in the summer of 1980 and 1981. Approximately 1000 people participated and the five shows attracted a total of 670,000 visitors. Since the renewed performances since 1993, many actors and directors have worked at the festival. In the performances, the life story is told in parts of Karl Störtebeker and his sprouts. The complete story will be told in successive years, so if you want to hear the whole story of Karl Störtebeker, you will have to travel to Rügen every year during the festival. In 2012, the current cycle of narratives began. 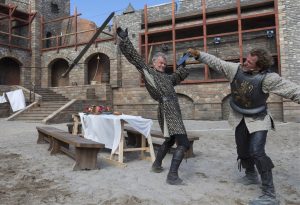 The Störte Cup Festival is still extremely popular. Since the first performances in 1993, there was only a decrease in the number of visitors in 2006. This was due to the bad weather and the economic crisis which then became visible in Germany and thus also on Rügen. The festival does not receive a grant and is entirely dependent on the visitors of the performances and sponsorship contributions.