The Schwanenstein is a large stray keel that is located about 100 meters northeast of the port of Lohme on the island of Rügen. The stone is in the Baltic Sea and has an estimated weight of 162 tons. The Schwanenstein is about 60 cubic meters in size. This makes it the fifth in size of the 20 strawberries that Rügen is rich and which are also protected. The Schwanenstein is also found in Lohme’s city weapon, which indicates that the inhabitants are proud of “their” stray keel.

The origin of the Schwanenstein 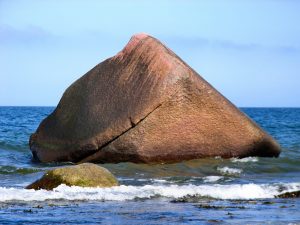 The Schwanenstein is made of hammer granite, a very hard type of granite. How the stone has come to its place is not entirely sure, but the stone of Bornholm is most likely transported to its current location during the last ice age. On the west side, the stone has a big burst that will grow over time. It is taken into account that ever a piece of the stone will break down. The gap in the Schwanenstein is becoming wider as ice crystals in the stone push the two parts further apart.

Like all the famous sights, there are also the necessary stories and legends about the Schwanenstein at Lohme. So there is a legend that tells babies were delivered by Adebar the stork. They clogged them into the slit of the rock, after which they were landed by swans. A sad story took place on February 13, 1956. A number of children were playing on the Baltic coast when it suddenly turned around. The ice cream that the boys played on broke because of a heavy storm. Some of them drowned, but three managed to cling to the Schwanenstein. Unfortunately, all attempts failed to save the boys. Only the next day when the storm lay down, their bodies could be taken from the rock. On the initiative of the children of Lohme, a memorial was placed on their grave in 1995.