The peninsula, in German Halbinsel, Wittow lies in the northeast of the island of Rügen. It is surrounded by the Baltic Sea. You can reach the island over land only through the Jasmund peninsula. There is also a ferry service to Wittow. Wittow beach is the longest of Rügen, 8 kilometers long. The beach is not very wide, in the widest places the beach is about one and a half kilometers wide. Because it is privately owned, Wittow beach is not busy. You can make walks on non-private paths. 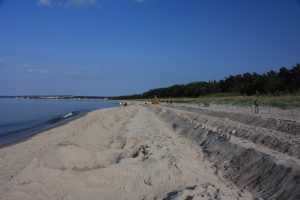 Wittow is for the most part privately owned and therefore can not be accessed. Part of the peninsula is located in the Vorpommensche Boddenlandschaft National Park. The national park is freely accessible to tourists. Many people visiting Rügen spend a day trip on the Wittow Peninsula because of the beautiful nature in this area. The northernmost point of Wittow is the Gellort, about one kilometer northwest of Cape Arkona. At the foot of the Gellort is the Siebenschneidenstein, the fourth largest barge in Rügen. The landscape at Wittow is characterized by the steep cliffs in the north and the lower Bodden landscape in the south. Because Wittow is exposed to the wind almost everywhere, the peninsula is also known as Windland.

The most famous places on Wittow

On the Wittow peninsula you will find the municipalities of Breege, Putgarten, Dranske, Wiek and Altenkirchen. Previously, these villages belonged to the municipality of Wittow. Nowadays the municipality is called the places where North Rügen falls. For nature lovers, a visit to Wittow is definitely recommended. The climate is not overly hot, the average annual temperature at Wittow is slightly less than 8 degrees and there is more than 500 mm precipitation on average per year.