Zudar is a peninsula of about 18 square kilometers belonging to the island of Rügen. Until 2004, Zudar was an independent municipality. From June 2004, Zudar is part of the municipality of Garz. Zudar consists in itself of eight smaller nuclei. The well-known gynecologist Max Hofmeier, who later became a lecturer at the University of Würtzburg, was born on the island of Zudar. 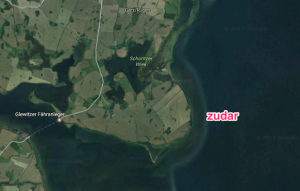 When you visit Zudar, you can see typical farm workers from the 1960s. The St. Laurentius church is well worth a visit. This church dates from the 14th century, and until 1370 it was a well-known pilgrimage because the church had a marijuana where Pilgrims would like to come to Zudar. But when a ship with pilgrims crossed in 1372, these pilgrimage ends. Thanks to various renovations and repairs in the 20th century, the church is still in excellent condition. The birthplace of Ernst Moritz Arnd, a well-known German writer, historian and freedom warrior who lived from 1769 to 1860 is also a sight to visit. But nature on the island is also worth seeing, as it is true for the entire island of Rügen. People visiting Zudar during their stay at Rügen do this for the beautiful views of the water and the tranquility and beauty of nature.

Location and connection Zudar with the Rugen